On the 27th of July at 6 pm, I will speak as part of GeoBLR at the Mapbox office in Bangalore about Cultural Heritage, Conflicts, and the Map. 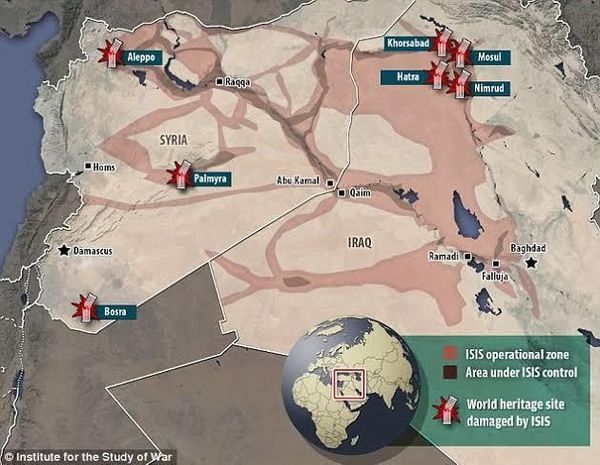 For the past 15 years I have been working in the promotion and revitalisation of cultural heritage and practices in countries in conflict. Mapping can be an important device to support locating archeological remains as well as living traditions.

The talk explores the challenges and opportunities of mapping in this context. It further addresses the issue of the value of (cultural) objects on the map. As there are many questions and no definitive answer, I hope that the presentation will turn into an engaging collective discussion.

Find the Mapbox office here on the map.

I will be part of a round table discussion on the 15th of June at The Triennale in Milan during the Milano Arch Week 2017.

Here are the details:

Hope to see you there

A while ago, a friend of my mother’s asked me if one of her 8th grade students could send me some questions for a research she was preparing for her final exam. I said yes without giving it too much thinking. A few weeks later I received the questions and realised how much responsibility was attached to my answers. I was faced with the difficult task of balancing honesty and simplicity, of keeping my cynicism at bay while articulating my answers so as to give full value to the sensitivity of Sara’s questions. It gives me hope to know that, in the general confusion of these blind times, a thirteen year old girl would like to know what is going on in different corners of the world. As our “interview” has been for me a very important occasion to stop and reflect, I thought it would be nice to share it.

Sara: What are the daily life conditions of the civilian population?

Francesca: In the past year, things in Afghanistan have deteriorated. Even though the war here has almost been forgotten, its impact on the civilian population is still enormous. UNAMA, the UN Agency that is specifically dedicated to Afghanistan, recently published a report stating that 2016 has been one of the worst years for civilians since the beginning of the war. Because of the on-going violence, in the last twelve months 650 thousand people have been forced to leave their homes and head to nearby cities or villages or ended up in refugee camps in order to find a safer place to live. Imagine: the population of fifteen cities like Avezzano [our home town] forced to flee: the numbers are immense and mind boggling. Moreover, this past winter, things have been even more difficult as there has been a lot of snow and avalanches. Many remote areas of the country have been almost impossible to reach because of the conflict hence making the living conditions of civilians – especially the poorest ones – really dire.

Sara: Are there still terrorist attacks? How can people protect themselves?

Francesca: The only way we can protect ourselves from war is to continue living our daily lives without being overpowered by fear. Keep going and keep working for a better tomorrow: I don’t think there is any other possible protection.

Sara: Can you communicate easily with local people? Do you think you manage to understand their needs and hardships?

Francesca: I work with art and cultural production. We can say that my work – in Kabul as everywhere else in the world – is dedicated to the needs of the mind and the spirit more than to the needs of the body. I have spent the past four and a half years in Afghanistan concentrating on this kind of “care”. I have learnt a lot in these years and I keep learning something new every day. In order to be able to understand – to use your words – people’s needs and hardships the important thing is to listen, to be open to the reality of a new place without the presumption of having all the answers and all the solutions before even having landed. Such a blind attitude will take you nowhere and will bring no good to you or to anyone around you.

Sara: How many and which organisations are active in the country and for which purposes?

Francesca: Afghanistan is full of local and international organisations active in various fields: from education to the defence of the environment, from building roads to vaccination. Some organisations do very good work, they are serious and committed; others take advantage of the many existing needs and of the fact that the international community continues to send a lot of money. It is really a mixed bag. If I have to give you an example of excellence, I have no doubt: emergency is at the top of the list. They build hospitals for the victims of war; they work with bravery, dedication and humility. We really have a lot to learn from people like them.

Sara: What is the security situation for you volunteers?

Francesca: It is important to understand that the majority of those who work in Afghanistan are not volunteers, but paid (sometimes overpaid) professionals who do their job in a difficult context. Taking care of the foreigners’ security is a very complex and incredibly costly business made of armoured cars, bodyguards and so-called security protocols – that is rules and practices of behaviour in a situation of risk. There are many nuances and your questions opens a complicated reflection on how to behave as well as on the “why” of certain choices.

Sara: Is there still a possibility to improve the political situation?

Francesca: The possibility of improvement is something we should never ever doubt – else we lose hope for the future. The real challenge is to understand the path for this improvement and the required ways and timelines. This is a shared responsibility between governments and civil society. For those like you, who are far away, it is important to keep remembering these wars even though they are no longer prominent in the news.

Here is a short interview recorded last year during the Design and Social Transformation programme in Barcelona.

Yesterday I went for lunch at the Afghanistan Center at Kabul University to see Nancy Dupree. I count the pleasure of her company among the most precious gifts I received from this city. We spent a couple of hours together and we ate an enormous plate of garlic beans and a bowl of sour yogurt.

Nancy is an amazing raconteur and an inexhaustible source of enchanting stories: her intimate knowledge of the country offers, to those who have the privilege to listen, a vertiginous journey across space and time.

Over the years, it never happened to me to spend some time with her and leave without a memorable story to cherish and remember.

Yesterday, when I arrived to her office, she was working on a photo-gallery about the pre-historic tools that are part of the collection of the National Museum. As a cover image for the gallery she wanted to use a photo of the façade of the museum before it was destroyed during the Civil War. She told me she went looking in her extensive photo archive and to her great surprise she could not find any image of that kind. She then went to see the director of the museum to ask him for a copy from their own archives, but he said they did not have any even there. Ever more surprised, she reached out to those who were in town in those years or could have had access to documents of that time. Nothing. It seems that before the Civil War no one considered taking a photo of the façade.

Her story ended there and our conversation moved on, but the thought of the photo that wasn’t there stayed with me.

There are so many moments and details that, there and then, appear entirely unremarkable. There are so many things that we take for granted and let slip away without thinking twice. It is strange to think that these details can then come back unannounced and reveal themselves through their absence in an unexpected future. It is strange to think that they end up becoming witnesses of a past that has left no visual trace.