This piece was first published in Kashmir Reader on June 14th, 2012. 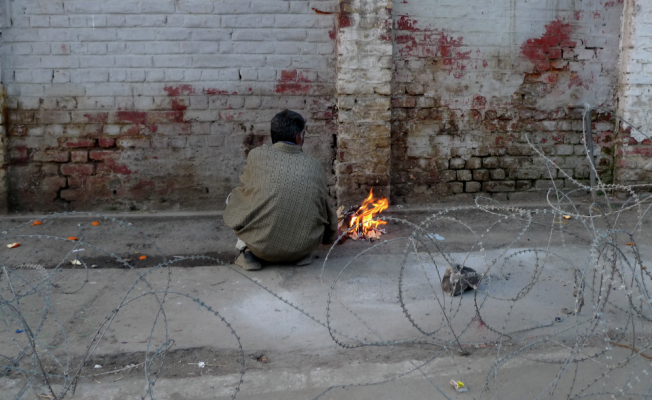 The first glimpse from afar confirms that Kashmir lives up to its expectations: a picturesque land of pristine natural beauty.
But then, the plane begins its descent and the runway gets closer. And dozens of military barracks start taking shape. With their apparent temporariness, they embody the ineluctability of permanence and with their blue and grey camouflage they occupy the landscape with a sense of intrusive heaviness.
The first encounter with Kashmir at the ground level is almost the opposite of its aerial view: it is armed, muscular, and grim. The nervous presence of the Indian army, with their self-assured attitude of righteousness, generates an edgy atmosphere. The army carry with them a sense of tragedy, they intimidate rather than conveying the feeling of safety and security that is supposedly at the core of their mission.
Once, while talking about Kashmir I was asked: “Tell me about this war.”
It is not easy to explain that in Kashmir there is no war as such, especially when the next sentence in your answer may perhaps refer to the fact that this is one of the most militarised areas of the world. But how does one tell this story without resorting to graphic descriptions of brutalities, without falling into the trap of a hyper-visual domain where the conflict is interesting in as much as it is spectacular? How does one account for the subtleties and the invisible consequences that a military occupation inevitably provokes?
Streets, walls, architecture are powerful entry points to a different way of narrating conflict. It is rarely the case that the built environment is considered as a possible tool to interpret this kind of situations. Many of the scholars who study this field, discuss it in terms of urbicide – the killing of the urban space, its violation by bombs, tanks and coils of razor wire. This theoretical approach treats the built environment as a victim, as one of the many casualties of war, but it fails to address it as a witness and a repository of memories and testimonies. This omission may lead to a limiting intellectual position that does not consider that the built environment does not lie, but maintains in its fabric the evidence of facts and stories that ideological discourses may try to erase.
When roaming in the streets of Srinagar, a city of poetic beauty, this undercurrent of tension never leaves you. Legitimised by the global argument of security, which is locally translated in terms of keeping subversive individuals at bay while protecting the cultural minorities and their heritage, the Indian army has appropriated temples and cultural centres across Kashmir, wrapped them in razor wire and practically transformed them into military bases. The military presence is so capillary that it is almost impossible to avoid it. In a recent article (10 April 2012), Kashmir Watch – a branch of the Europe-based Kashmir International Research Centre – reported that in the past eight years the army vacated about 1300 private and public buildings, but 1800 are still under their control – including eight cinemas and seventy nine hotels.
The visual impact of this presence is both evident at first glance and hidden in the details that may not be striking in their appearance, but are devastating in their recurrence. What sign does it leave on a child’s psyche the memory of walking every day past a checkpoint, the ordinariness of bunkers and weapons on the street, a broken kite entangled in a coil of barbed wire?
It is not always necessary to use gory images to understand the depth of pain and the blindness of cruelty.
To this sort of considerations, the Indian army and official governmental sources respond by claiming that since the 2010 summer of unrest things have improved. Lt Gen SA Hasnain, the General Officer Commanding (since transferred out of Kashmir) has recently taken pride in the army’s newly discovered “people friendly methods” (Hindustan Times, ‘Winning hearts’ in Kashmir to continue: Army, June 8th, 2012), which include playing cricket with boys on the street and changing the timing of convoys.
The state government boasts statistics about the renewed presence of tourists: the number of visitors is used against detractors and malignant activists to demonstrate the achievement of a new phase of peace and stability: honeymooning couples coming from all over India taking boat rides on the Dal Lake provide evidence for that.
Agha Shahid Ali, the poet who more than anyone else gave voice to the unique mixture of beauty and brutality that seems to be the essence of the Valley, has been my guide during my last visit to Srinagar. I have looked at the city through the lens of his words. While wandering around the lanes of the old city, my steps seemed to echo each one of his verses. In the apparent quiet that shrouded the city, the stones of ancient buildings mixed with those that came to symbolise the 2010 uprising.
“[W]hen you left even the stones were buried: / the defenceless would have no weapons” – Agha Shahid Ali says in his poem titled Farewell (1998). The authorities may claim the taming of stone pelters while the lack of visible daily violence can come to signify peace. And yet, the poet is there to remind us what the Latin author Tacitus noted almost two thousand years ago: solitudinem faciunt, pacem appellant – they make a desolation and call it peace.